In addition to the project started by Malin Moll and Christoph Quandt on the Yellow Hyper Giants using high-resolution spectroscopy, measurements at Rho Cassiopeiae with low-resolution spectroscopy are presented. It is attempted to determine the line ratio of the G-Band to H-Gamma to follow the temperature changes of Rho Cas.

Figure 1: Selection of spectra from the period from May to September 2018

The ratio of the G-Band to H-Gamma described later and the different quality of the resolution in the individual spectra are clearly visible. 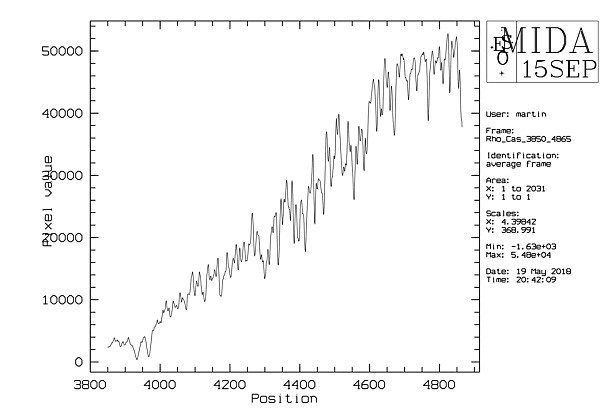 Figure 2 shows a sum spectrum of 3 single images of 300 seconds each, as it typically appears after the extraction in Midas. Figure 3 shows the self-made grating spectrograph with a grating of 600 lines/mm. Collimator and camera lenses have a focal length of 100mm.

In May 2017 the Cepheid Delta Cephei could be observed continuously spectroscopically during a pulsation period during a fair weather week. The period of Del Cep is about 5.3 days, the spectral class changes during this time from F5 to G2 and back to F5. Delta Cephei is classified with luminosity class Ib and therefore a supergiant giant, which in comparison with Rho Cas does not reach the main parameters mass, radius and luminosity.
One of the main spectral features of the F-Class is the G-Band. The G-Band is the CH molecule of 4299-4313 Angström (A). Gray/Corbally [1] emphasize its importance in spectral classification due to the rapid increase in intensity at low temperatures. R. Walker [2] describes the G-Band as a trademark of the F-class and points to the ratio to the adjacent H-Gamma line.
This ratio is thus an image of the spectral class change and thus also of the temperature change of a star. Figure 4 shows the brightness curve during a pulsation period as a phase diagram from own measurements, Figure 5 shows the ratio of the G-Band to H-Gamma recorded during the above mentioned week in May 2017. 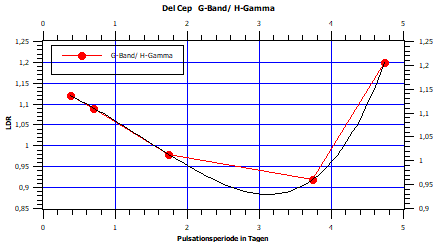 Both curves show a very good agreement, characteristic are the slow descent and the steep ascent. Figure 4 shows the evaluation of the two green channels and the blue channel recorded with a DSLR. In the difference of both curves, the change of the color index (FI) from green to blue already shows the spectral class change. With a larger FI in the minimum, the star becomes redder and thus cooler and later in its spectral class. This result formed the starting point for the consideration of whether the temperature change at Rho Cas can be measured via the ratio of the G-Band to H-Gamma.

The spectrograph is a self-construction, the grating has 600 L/mm, is rotatably mounted and can be adjusted in wavelength via a worm gear. The star spectrum itself is recorded slitless. The camera used is a CCD camera Atik 314 L+. Typically 3 spectra are recorded with a single exposure time of 200-300 seconds. The dispersion is 1 A/pixel, the average resolution is R= 500-1000, the resulting signal-to-noise ratio is about 100-150.

The reduction of the two-dimensional spectra is done with the software "Midas" of ESO using the context "SMS" developed by Günter Gebhard. To reduce the spectra, Bias- and Darkframes are subtracted, the individual images are stacked and the wavelength of the spectrum is calibrated using the calibration spectrum. The equivalent widths of the lines of interest are then measured.

Observations and own investigations at Rho Cas

The self-determined period of brightness variability for the last two cycles is about 492 days. The brightness in V varies between 4.3 mag in maximum and 5.0 mag in minimum. Figure 6 shows the own light curves of the U- and B-channel for the period of the common observation by photometry and spectroscopy. 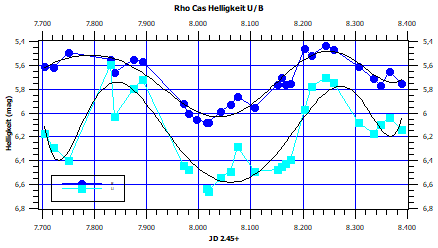 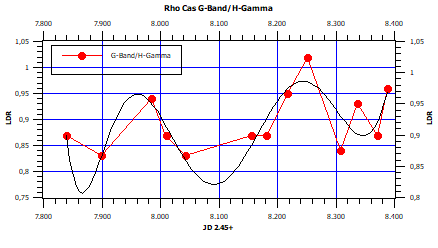 The agreement between brightness curve and spectral class change is not as clearly pronounced as in the Delta Cephei project. From approx. JD 2.458.000 the curves fit better to each other than before this time.
Due to the small amount of data and the still too short observation period, a period analysis carried out with Peranso does not provide any better information.

The evaluation of the recorded spectra was initially carried out with measurements of the equivalent widths. When measuring the equivalent widths, the dependence of the spectral resolution on the nightly seeing due to the slitless recording technique results in the problem that the measurement range from recording to recording is not exactly reproducible.
In addition, due to the low resolution, the individual lines are not completely resolved and therefore other lines contained in the measuring range are also measured. A particularly good example of this is the G-Band. It is defined as a CH molecule of 4299-4313A with a total width of 14 A. In its vicinity is the FeI line 4326A (see Fig. 1, spectrum of 12.05.2018). In the low resolution spectrum, this line is rarely separable from the G-Band. This results in measuring widths for the G-Band that can vary from 40-50A and then also contain the FeI line.
The resulting measurement errors were unsatisfactory in the long run. In connection with the aspect 2018 and the project call Rho Cas in high resolution by Christoph Quandt and Malin Moll, who use the line depth (LDR=Line Depth Ratio) for their measurements, the idea arose to use this measurement method also for the own measurements.
The absorption core of the blend can always be found at the same wavelength and can therefore be used easily and safely.
However, the method is reserved for clearly defined lines. For lines that are only slightly different from the continuum, the measurement of the equivalent width is more advantageous.

Determination of the continuum

The normalization of spectra of the spectral type F to K as they can occur at Rho Cas, is often difficult to carry out by hand, as the determination of the continuum is always subject to personal and thus arbitrary assessment. This can result in continuum ranges that are evaluated differently from image to image, which in turn have an influence on the measurement quality. To minimize this source of error, the CONTINUUM/SPEC function from Midas is used for standardization. Midas calculates a polynomial curve of the continuum from an evaluation of the line profiles supported by algorithms, which can then be used for normalization.

Measurements of other lines

Part of the project is the measurement of lines of different excitation energies, which originate in different depths of the star atmosphere and whose development can be observed over a longer period of time. For this purpose, lines were selected that show up in the low-resolution spectra with uniform quality and can be reliably measured. Figures 8 and 9 show the line intensities of H-Beta and the neighbouring FeI 4921 line during the observation period. 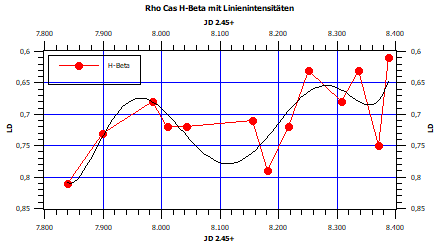 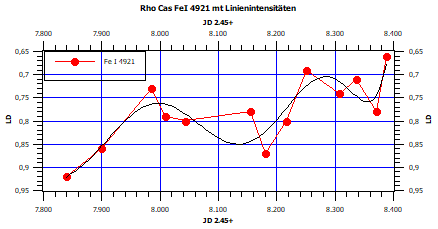 Both lines are very well defined in the spectral images and are measured with line intensities. The almost congruent shape is interesting. Only small relations to the brightness curve and the ratio G-Band/H-Gamma can be recognized.

Figures 10 and 11 show measurements of equivalent widths of the two lines BaII 4934 and YII 4900. Both lines are well distinguishable in the spectral images and can be better measured with the equivalent width method due to their low line intensity. 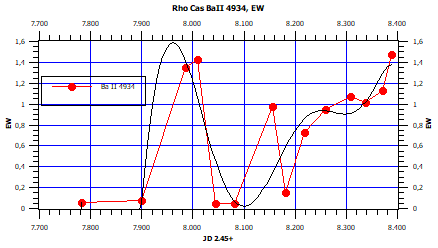 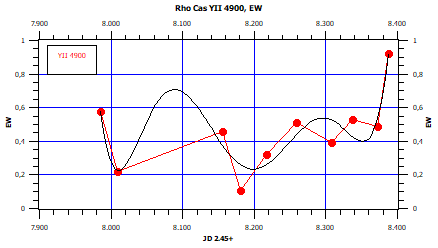 Both lines were selected because they were also used and reported by professional astronomy. However, it is difficult to establish a connection with the other determined curves at this time.

The aim derived from the Delta Cephei project, the temperature change using the ratio of G-Band to H-Gamma, has so far only been partially achieved. The recordings of selected other lines could not be used to explain the brightness curve. The project is designed as a long-term observation, therefore further observations have to be awaited. The previously aimed quota of one spectral image per month could be shortened to improve the data situation. The quality of the spectral images has only gradually developed into a uniform standard during the observation period due to the self-construction project of the spectrograph. This standard must be maintained in the future in order to obtain a comparable quality of the measurements.
From the data sets received from Malin Moll and Christoph Quandt for the temperature determination at standard stars a temperature curve for the ratio G-Band/H-Gamma is to be determined in analogy, so that in the future also a temperature indication can take place.